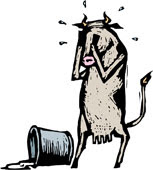 I hate juice, especially when it spills on the floor. That stickiness is such a nuisance to clean. Don’t you love it when you are out to dinner and the glass spills and you are dodging out of the liquid’s way … grabbing napkins to stop the flow? I learned not to cry over spilled milk.

Really, no kid sits there and says, “hum let me knock this over and see what happens.’ Well ok, I realize that there are probably a few kids out there that may do that… but for the most part, it is just part of being a kid.

My brother, Rajiv was going through a phase of sorts. He kept spilling his drink. The more my father reprimanded him, the more nervous he became and couldn’t help spilling. My father had enough. “If you spill your milk again, you are going to get beat.” Well what do you think happened? Rajiv spilled his milk. My dad was livid. He told my brother to come to him. He was going to teach him never to spill his milk again.

My brother looks at me and says, “I didn’t do it, Reema did.” I was shocked. I didn’t touch it. So my dad tells me to get up and come. I kept denying it over and over. He wouldn’t listen but only got more riled up thinking I was lying. I got beat… with a metal fly swatter. He wouldn’t stop beating me.

This soon stopped him. He later told my mom about it (she was at work). I had welts like you wouldn’t believe.

When one of the boys spills their drink, I inhale, as it IS annoying, realize they didn’t mean to and clean it up.

It is not worth crying over spilled milk.

Years, many years later, my brother admitted spilling the milk.

One Response to Don’t Cry Over Split Milk