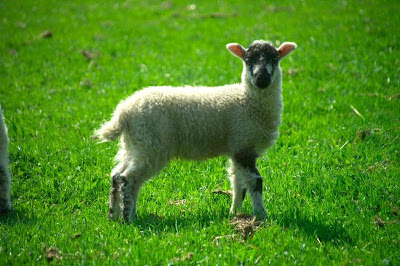 While I was at the gym working out, I was chatting with a friend of mine. She is on the fence about God… does He exist? Evolution is more scientific a theory, apparently. So we were talking about an assignment that the boys were doing in school. It was based on the story of Cain and Abel.

It was about the part where God asked each of the boys to offer a sacrifice. Now in class this was the only part of the story talked about… not the beginning or later part. So she says, “Why wouldn’t Cain get upset with God? He offered God his gift. He was a man of the fields. WHERE WAS HE SUPPOSE TO GET A LAMB? From his brother?”

Oye! If you just look at that piece of the story it is hard to explain. So I was trying to explain that it was more a token of obedience. And that the lamb was symbolic of Christ death… etc. Yet when you take the story as is.. as she did… she explained it to her son as such… of course Cain would be hurt if a parent rejected their child’s gift wouldn’t that child be upset… and want to hurt his brother?

So then… I was trying to answer her question of where was Cain suppose to get the Lamb??? So I thought (genius that I am) about how God provided the lamb in the thicket bush for Abraham and Isaac… so I proceeded….

God asked Abraham (who had waited forever to have a child) to show his obedience to God by offering his son as a sacrifice……
Oops… I see the look on her face.. and I realize that I blew it! Her face immediately said “what kinda crazy God would ask him to kill his son……

So as I back tracked to say it all worked out because Abraham passed God’s test of obedience and God then provided a lamb….

So I ended… with the simple answer of “I don’t know where Cain was suppose to get a lamb.” I don’t know!

So I am not a great person to come to with biblical questions. I just believe. I have faith. I love God. At the end of the day… if there is really no God… I know that life was lived better with the hope and faith for a Higher Power. I live with the hope of heaven and happily ever after.

Yet if there is a simply answer of where Cain was suppose to get a lamb, I would love to know!

One Response to Bible 101