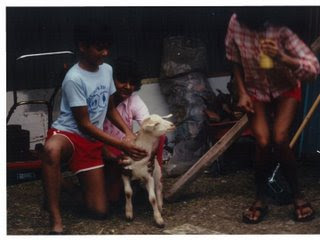 My brother Kumar has his own blog (Wonderingaboutgod.blogspot.com) and did this post called Fancy Nancy. He tells a nice little story about one of our “pets” growing up. Well my version is slightly different, so I couldn’t be still. This is a picture of Fancy Nancy, Kumar’s pet goat. What is missing from the picture are two more goats, not quite so nice as Fancy Nancy, and about 10 chickens.

My father thought that we should experience some of the culture he had growing up, such as drinking goat’s milk and collecting eggs from one’s own chickens. Let me preface this with we never had a dog or any other normal pet. But I suppose that isn’t surprising, as we were NOT a normal family. We lived within city limits. We had a garage/shed that was converted into a makeshift barn.

And thus, a trip out to a farm and we had new members to the family. Understand, we were for the most part all afraid of animals. Kumar’s goat was younger, so she was more controllable. He was 10 or so, and so he thought it was all great.

Me, on the other hand, did I not just blog about my high school years being horrid? Hum… I wonder why. This was the kind of crap I was hoping no one would ever see. GOATS, CHICKENS, oh, did I mention a trailer park behind us?

One day I returned home from some school trip. I looked out the school bus to see my parents driving up. As the door opens, who is in there to greet me… FANCY NANCY. My brother writes in his blog as he retells this story that being a teenager I was mortified. I am not sure that is a strong enough word.

To be mortified means: To cause (a person) to be self-consciously distressed. I am not sure the is a word to express that extreme embrassment or mortification I felt. Did I mention I was already a geek, outcast, misfit?

Thanks Kumar, for bring that memory back.

Oh by the way, after a while, when it got too much, the chickens became supper and the goats were adopted out… to a real farm again.

One Response to Fancy Nancy