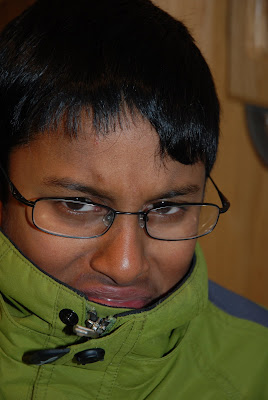 Yesterday I was at the mall getting haircuts for the boys… a task that is ranked on the bottom of my list, right above laundry.
Their hair was not that bad, but I really wanted them to have a nice crisp look for the first day of school. They all hate haircuts as much as I do. So there was the usual rumblings.

Sammy really did not want to get his cut. “Just my sideburns, then,” was his reply, when I said they look messy. For a moment, I considered. But it would probably be the full price and more importantly, I did not give the other boys the option either.

As each child got their cut, Sammy started to get more defiant. “You can’t make me!” was the reply, with shoulders back, jaw tightened and face full of anger. It was two of us, head to head, bumping our horns… what now?

I am in the middle of the hair salon, wondering what my response to my 13 year old should be? “You can’t make me!”
What ugly words and more so, what hurtful words.

I can’t even imagine what the consequences would have been if I was ever stupid enough to say that to my mom or dad.

I looked at my son, who is for the most part such a loving child, and wondered did he really think that was a smart response?

I had a lot of responses rushing thru me, one being to throw him across my knee and give him the butt whooping he needed at the moment to know never ever to speak to me that way… but I looked at him and walked away… for the moment. If we were at home, it would be different. But we are in the midst of a lot of people.

As I walked away, I wondered what a “smart parent” would do?

Then Sanj walked in, (coming to have lunch with us on his break). A God Thing! I filled Sanj in, he walks over to Sammy (and basically said don’t be ridiculous and don’t speak to your mom that way… 15 seconds. It was over.

Sammy walked over, defeated for now. His hair was cut and attitude adjusted for now.

Oh boy… I can see the next few years are going to be a barrel of laughs and serious struggle of wills.