Strumming to His Own Beat! 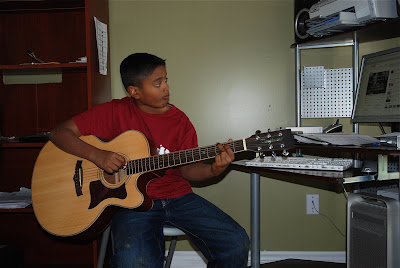 I have worried about my son, Jordan, for many years. For the most part the word quirky describes him. The characteristics of a true middle child. He was a child I had trouble relating too.

He is 10 and a half and growing up. And thankfully he is growing into a wonderful child… yet totally his own person. He is alot like Sanj, though Sanj may not see it. They even look alike.

What used to frustrated me most was his lack of interest in anything. He is bright and things come easy to him. But he did not put effort into things… school or extracurricular activities.

Finally he showed an interest in the guitar. This is a popular instrument with kids right now… and cool. Probably thanks to games like Guitar Hero or Rock Band.

So … this summer we let him take guitar lessons. YES!!! He has come alive. He walks around strumming the guitar constantly.
He is even practicing a song to play on Remembrance Day at school with a group of kids!!!

I am so proud of him. He is coming into his own self. He is taking more of an interest in putting his better effort in hockey and even school.

He used to avoid contact… but today he actually came and gave me a REAL hug and said “I love you.” So cool and so special.

So to my child that is smack in the middle of our family… you are so special and unique. Never apologies for your uniqueness but rather embrace them and be proud of them.

But if you could be a little more cooperative at times… and be in the box once in a while… that would be cool too!
I love you, Jordan!